Pirates have been around since before Roman times and have survived into the modern day – the Somali pirates of a few years ago being the best-known examples.

But when we think of the traditional buccaneering pirate capturing galleons, burying treasure and making victims walk the plank, and Johnny Depp lookalikes, we’re essentially talking about the Golden Age of Piracy.

These were the real pirates of the Caribbean and they also roamed the Atlantic, Pacific and Indian Oceans. In the early years of the Golden Age they were often Anglo-French seamen based in the Caribbean and attacking Spanish colonies and ships, while also ranging into the eastern Pacific. The most famous ones tended to come a little later and ranged further afield, sailing long distances to attack prize targets in the Indian Ocean and red Sea.

Towards the end of the Golden Age, the focus shifted again towards Anglo-American pirates. They plundered not just the Caribbean, but all of the eastern seaboard of North America, the West African Coast, and the Indian Ocean.

Our own Captain Kidd is one of the most famous- and he’s also the origin of the story of pirates burying their treasure. He really did bury his booty at one time, and some say a fortune of his still waits to be unearthed. There’s lots more on him on our Captain Kidd the Pirate page 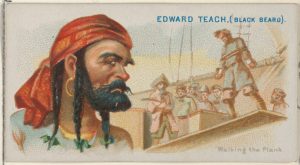 Running Kidd a close second in terms of fame, but undoubtedly a lot more blood-thirsty, was Edward Teach, aka Blackbeard. He liked to scare his enemies witless before a battle by dressing up all in black, armed to the teeth, with spluttering slow-burning fuses under his big black hat. 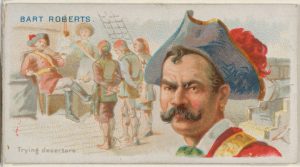 Bartholomew Roberts, known as Black Bart, was the most successful Western pirate of all time, notching up over 400 ship captures off the Americas and West Africa in only three years, before dying in battle and being buried at sea. 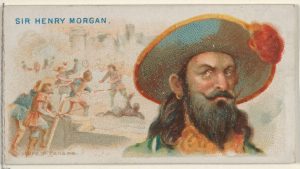 This pirate raided the Spanish main and even captured Panama. He was unusual among pirates in dying of natural causes. He was actually due to be executed in England but was instead made Governor of Jamaica. 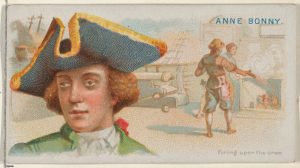 One of several well-known female pirates of the time, Anne teamed up with John ‘Calico Jack’ Rackham, and another female pirate, Mary Read, who disguised herself as a man. All three were eventually caught, but Anne and Mary escaped their date with the hangman as they were pregnant. Prior to them, there was also Grace O’Malley, Ireland’s famous Pirate Queen.

Your opportunity to sail a pirate ship today

If you want to participate in the Captain Kidd Pirate Ship Experience and the building and sailing of a replica of an original pirate ship, please contact us